Ruasagavulu – with Snake Beings in Fiji 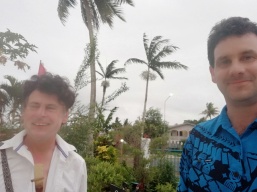 Meditative tropical avant-garde instrumentals for keyboards, ukulele, dholak, duduk, harmonicas, DIY kitchen gamelan, and video. This was one of the last in-person international collaborations from before the world ended.

This is currently a pre-order work in progress, as some of the mixes will be refined  over the next few weeks.

In the meantime have a listen to the ‘Ngumbang‘ album we made together in 2015 – a fusion of several genres and a DIY manifesto – “Pick up the pieces and make them into something new, it’s what we do…”

We also made a new Indonesia-inspired electro-acoustic track for Other Islands 2012-2018:

– founder of the Hamilton Underground Film Festival, composer, musician and electrical shrine maker – is a New Zealand / British experimental filmmaker and musician who has produced over 40 independently released film soundtrack CDs and made a number of short experimental and narrative films in Spain, U.K., India, Vietnam, and New Zealand.

One thought on “Ruasagavulu – with Snake Beings in Fiji”

[…] a duo with Emit Snake-Beings, for an as-yet-untitled sequel to Ngumbang, coming in 2020 (we had a recording session in Suva, […]