Here’s video from my two visits to Indonesia in 2014 – a fascinating new country that I’m only just beginning to explore, and can continue to do so through gamelan (like Indonesia itself it gets more complex & interesting the more you look).

Partly because I’ve visited several countries in East Asia now, and lived in two (Japan and South Korea), Indonesia seems like something else entirely. It’s less Chinese-influenced and has a style of its own.

[Diary from September] This trip was just enough for an introductory sampler. I decided to focus on the arts this time rather than the mountains, ocean and jungle which would require more time, money and preparation.

I had mixed results in my cultural studies mission this morning. I did find a new smartphone to use as a camera to replace the one I lost in Kuala Lumpur – it’s a step down in quality and storage capacity (seems fitting somehow in coming to a poorer country) but still would have been state of the art less than a decade ago, which illustrates the dizzying speed of technological progress in gadgetry these days. My late Dad loved electronics and especially cameras & filmmaking (it’s a pity he never lived to see my videos of Japan) but he didn’t realise that the next step was to have just one gadget that does everything.

Next I met a friendly local who pointed me in the direction of the arts centre, where I could see the best batik art on the way to the kraton. I went along and met the teacher who showed me the process, using wax to draw the outlines on the cloth and dyeing around it, and a range of works from local students and masters. I was impressed by the colour and variety, and cloths are much easier for a traveller to transport than paintings on canvas. I bought three pieces for around $40, which would have cost at least $100 each at home.

Next I met another friendly local who wanted to practice his English as (he said) his daughter had married a kiwi and he was going to visit them in Auckland soon. He told me the kraton palace was closed until 12:30 but recommended I visit the silverware factory in the meantime and found me a becak (pedal-powered tricycle taxi) driver. The silver filigree is another beautiful Indonesian art form consisting of silver wire intricately bent into various sculptures. These were a little out of my price range (though still a fifth of what they’d have cost at home) so I ‘saved face’ (an important Asian concept) by buying some postcards instead.

There was one more detour on the way to the kraton, which was a shop the becak driver recommended selling wayang kulit, or shadow puppet figures. I didn’t buy any of the large figures on offer but asked for something smaller and probably got ripped off a bit here, though I did bargain the guy down from 400,000 to 300,000 rupiah and am now the proud owner of a figurine of the hero Arjuna.

After these detours I eventually got back to the kraton, only to find it was now closed!

Clearly the fool and his money were soon parted, although I had been warned beforehand that Indonesians just see foreigners as a walking source of cash and will hassle you mercilessly to buy things – but actually they’re very nice about it, the artworks are genuinely beautiful, even the ripoff prices are relatively cheap, it’s good to support the arts and keep traditions alive, and it’s hard to begrudge them when the average Indonesian is paid less in a year than the average Australian gets in a month (not that you feel rich in Australia or NZ when everything is so overpriced). 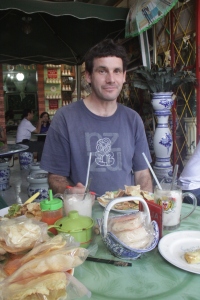 This trip’s been a progression from filthy rich Singapore to middle class Malaysia to distinctly third world Indonesia. I’ll have to do a bit more study to learn how & why these three neighbouring countries have had such different economic outcomes. For example $1NZ is worth approximately one Singapore dollar, three Malaysian ringgits, or over 10,000 Indonesian rupiah. In Australia my income is… below average for my age (my punishment for doing an arts degree) but here I’m suddenly rich. It’s an interesting feeling to be able to go to an ATM and become an instant millionaire! I had a plate of nasi goreng for dinner yesterday for a dollar equivalent, and just when I was thinking how cheap that was, I found similar food at half the price around the corner.

Watching a five-hour wayang kulit shadow puppet show with locals (and a few westerners who were there to study gamelan) the other night in a village near Yogyakarta I was struck by how well the music evoked the bronze age, with the musicians literally hammering. Also, interesting as the gamelan in NZ & Perth is, it was so much more evocative being surrounded by rice paddies, banana and coconut palms, fireflies, the call to prayer from a nearby mosque, the aroma of clove cigarettes smoked by the musicians (not an unpleasant smell like regular tobacco), the full moon above and volcano nearby, and being served Javanese food (sweet tea, peanuts, bananas, potatoes, yams, on a banana leaf plate).

It was well worth seeing the music in it’s natural setting even if I couldn’t understand a word of the libretto. Learning Bahasa Indonesia beforehand wouldn’t have helped, as the play was all in Javanese. Bahasa Indonesia (very similar to Bahasa Melayu in Malaysia) is the national common language of commerce, government and the media, but the numerous local languages are for friends & family & culture. It was possible to get the gist of some of it though (e.g. the self-explanatory fight scenes), and to enjoy the comic touches -at one point one of the mythological characters rode a motorbike and had to get off to pump up the tyre, with sound effects provided by drummer, and some of the spoken interludes obviously included jokes and audience participation.

I also visited Borobudur, the world’s largest Buddhist temple. The explanation for why it’s found in a predominantly Muslim country is simple: it’s over a thousand years old, and predates the arrival of Islam. Fortunately this also illustrates what a diverse and religiously tolerant country Indonesia is.

So after a wonderful few days in central Java (thanks mainly to the hospitality & friendliness of the locals I met), I’m now on the last leg of my trip, in Bali. I have to psych myself up to go back to work on Thursday, but in the meantime there’s still another new island and another new culture left to explore…

One thought on “Yogyakarta, Indonesia”